Released today by the Department for Environment, Food & Rural Affairs (DEFRA) the annual statistics on fly-tipping incidents and enforcement actions taken in England show that fly-tipping is still a growing problem in England – continuing the upwards trend from 2013/14.

WHAT IS FLY-TIPPING AND HOW BIG IS THE PROBLEM?

As simply put by the Oxford Dictionary, fly-tipping is “the practice of leaving waste somewhere illegally”.  Some people and businesses choose to fly-tip in order to avoid paying disposal costs (or landfill tax) when getting rid of waste - creating a huge challenge for the UK as it puts pressure on public spending, whilst also causing serious harm to the environment and local wildlife.

WHAT DO THE LATEST FLY-TIPPING STATS SHOW? 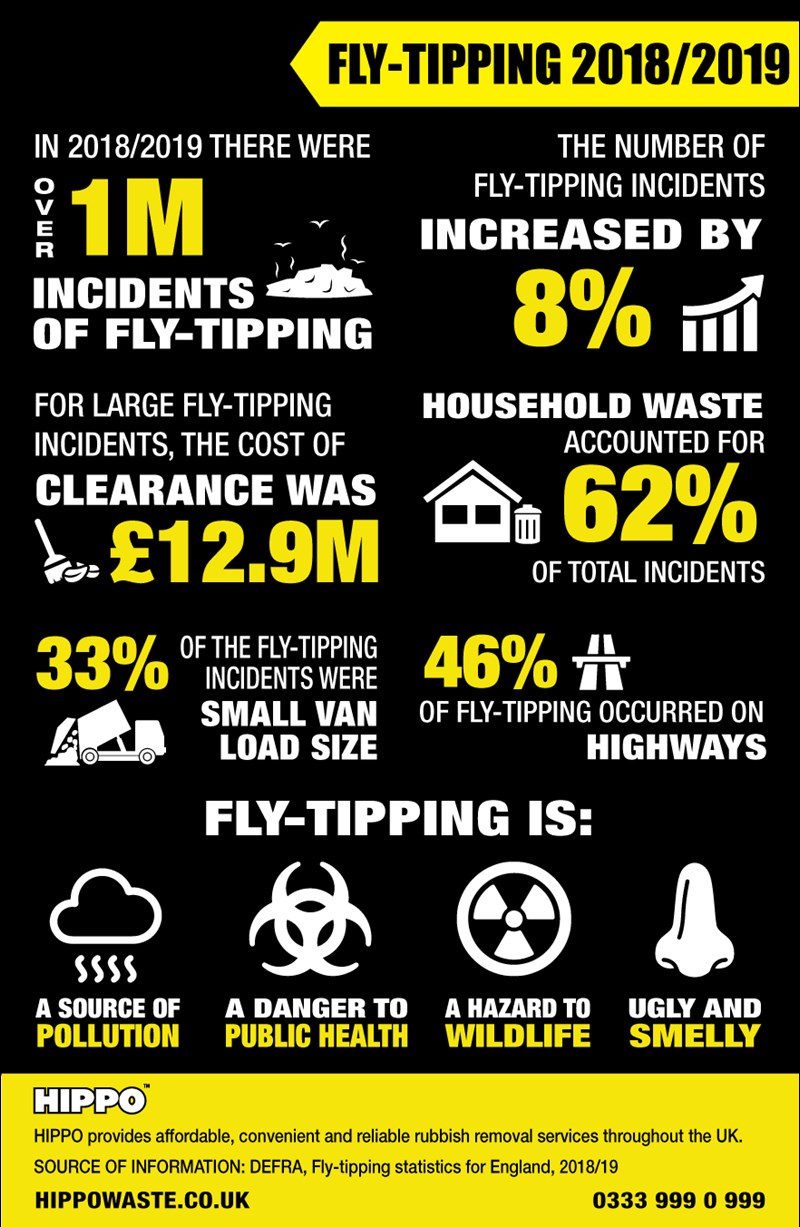 Click here for the full report summarising the number and type of incidents of illegally deposited waste, the cost of dealing with them and the actions taken against fly-tipping in England.

Those who fly-tip are committing a criminal offence punishable by a fine of up to £50,000, up to five years in prison, or both.  The police and authorised officers of the Department of the Environment have the power to stop, search and seize any vehicle used, or suspected of being used for illegal waste dumping.

As a householder paying for the removal of your rubbish, it's your legal obligation to make sure waste is only passed on to a licensed waste carrier and not a rogue trader who may be likely to fly-tip. If you don't, you could get a fixed penalty notice of up to £400 or a fine of up to £5,000. Ultimately, your waste is your responsibility.

You can learn more about fly-tipping & the law on Keep Britain Tidy’s dedicated page.

HOW TO PREVENT FLY-TIPPING

To avoid unauthorised waste removal providers and rogue traders, the public needs to know what to look out for. Our advice is:

Should you come across an incident of fly-tipping, the best course of action is to report the incident with your local council, making note of what you can see amongst the rubbish. Councils are often stretched to the point where fly-tipping isn’t immediately dealt with, so be sure to let any neighbours and members of the community know that you’ve reported its whereabouts.

HIPPO is a responsible business which conforms to the legislation and also actively pursues partnerships with waste recycling centres that share our commitment to recycling. You can learn more about our responsible and reliable waste disposal process here.

No matter how much household or garden waste you need to dispose of, our range of HIPPOBAGs, Skip Hire and Man & Van services means that there’s always a convenient, cost-effective and reliable rubbish removal solution that works for you.